Me, an Olympus & Marrakech… Part Two

Following on from my other blog a few weeks back, I thought I would add some  further images from my time in Marrakech…

This collection of images is pretty varied, but really demonstrates the contrast one can find in this wonderful city.. Everything from authentic street sellers, to the amazing religious buildings and the strong architecture of the kings palace. 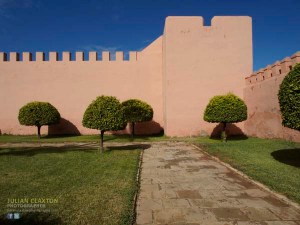 I had walked for miles around the city (which I prefer to do, to find those bits which are out of reach and removed from the usual tourist scene) and stumbled on the outer walls of the Kings Palace.. The sun was strong and the deep blue winter sky filled the frame perfectly and really did make this shot. Within moments the sun had become overcome with cloud and the moment was gone.

Bahia Palace is certainly one of the highlights of a visit to the city… ringing with the click of camera shutters in my head, I wanted to shoot something different. Of course the palace is amazing and no wonder people take so many pictures.. but I needed to find something away from the ordinary.. so, sitting on the window, taking in the wonders of the decorative ceilings and just enjoying the scene, I was confronted with tour bus after tour bus of bored looking tourists. Thinking these groups were in fact spoiling my piece, I looked up and saw this tourist looking very bored, leaning against the wall – the picture was made!

My oddness for anything other the normal at the Bahia Palace continued as I stumbled upon this cat, sat outside the ornately decorated window shutters of the palace 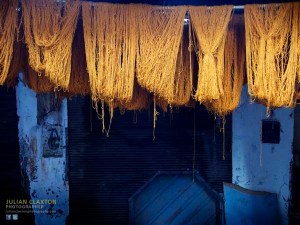 I was on a final stroll around the Medina, with just two hours before my flight departed back to London.. Nothing was really happening for me, it was really quiet in the Medina and the street vendors in the souks were only starting to open up, which afforded me the time to stand, enjoy and watch daily life. As I walked through a tiny alley, I cam across this fabric which had recently been dyed and was hung drying.. Now, having walked through this part of the Medina several times, I had not scene fabrics hanging like this. The fact it was early and the shade in the background had made it a early morning blue really set the shot.

Part Three of Marrakech will follow in a few days….

My passion for photography is supported by experiences gained on exciting travel adventures and through working for fantastic photographers. In 2006, I made the exciting step of realising my dream of becoming a freelance photographer. Since this pivotal moment, I have held numerous exhibitions, been featured nationally & internationally in print and won numerous awards, including being a finalist in the National Geographic Photographic competition in 2013 with one of my documentary images from the Sudan. From an early age I began to enjoy taking pictures of my daily life, basking in the thrill of sending the film to the printers and eagerly awaiting the pocket sized prints. My first foray into the world developing and printing strangely began at school when I was asked to produce a descriptive photo for the school newspaper. A front page shot later and I was destined to start the long arduous journey of becoming a photographer. In between exciting travel adventures and working for fantastic photographers, I graduated from college and at a crossroads in my journey to becoming a pro photographer, I embarked on a career working as a medical photographer. Learning new skills and dabbling in video production as well as progressing design skills, I yearned for the challenge and freedom of becoming a freelance. I have been fortunate enough to work on some amazing assignments which have included shooting a documentary assignment with an air ambulance, gaining full access to a British Pro cycling team during an international UCI tour, cycling to Rwanda and creating a photographic documentary of my journey. The experiences continue to grow, meeting wonderful people to photograph and telling the story of their journey. The list of events and striking moments that have played out through my viewfinder continue to grow and provide me with ever increasing snapshots of life to capture. One of the highlights of my career thus far has been staying in rural Uganda, teaching photography to the kids from the region, in a project I set up in late 2014, entitled ‘Give a child a camera’. The basis of the project is to supply 35mm cameras and film to the rural schools in this region of East Africa, teaching the children how to shoot photographs. After a week of taking photos of their life, an exhibition is held at the school and the children leave with their very own album, camera and film. One of the images I shot at Eden school in rural Uganda, during morning chapel won the 2015 Travel Media Tourism and Photography award. A great honour and one that I wouldn’t have picked up had it not been for the wonderful children of East Africa. For further information please visit www.julianclaxtonphotography.com
View all posts by Julian Claxton →
This entry was posted in Uncategorized and tagged africa, Bahia Palace, Ben Youssef, Ben Youssef Medrassa, marrakech, Marrakesh, north, photography, travel. Bookmark the permalink.